Broadly, the developed markets were muted in the third quarter of 2021. This was because of declines in the market during September that erased many of the gains made earlier in the year. That said, commodities gained, with natural gas prices seeing a sharp increase.

While the direct impact of the Covid-19 pandemic has lessened for many economies, businesses are now struggling with the indirect consequences, such as supply chain issues. The Organisation for Economic Co-operation and Development (OECD) has reported that the recovery of the world’s major economies is losing momentum as consumers remain reluctant to eat out or visit attractions and shops.

As a result, growth figures are expected to slow over the coming months.

The FTSE 100 saw plenty of movement during Q3, with significant downturns throughout the three-month period. As the chart below shows, the index recovered most of its losses by the end of the quarter, finishing on 7,108.

In September the government announced increases to National Insurance contributions (NICs) of 1.25 percentage points from April 2022 to help bolster the NHS’s coffers and deal with social care.

Business owners and investors were also impacted, as the government announced a Dividend Tax rate rise. This also increased by 1.25 percentage points and comes into effect in from April 2022.

In September the preliminary IHS Markit Purchasing Managers Index (PMI), which monitors business activity in the UK, fell to its lowest since February 2021. It slipped from 54.8 in August to 54.1 in September. While the reading indicates growth, its fall has been linked to supply chain challenges.

Equities started well in Q3 after a positive Q2 earnings season and ongoing economic recovery from the pandemic.

While the Delta variant continued to spread, many larger eurozone countries have vaccinated around 75% of their population against the virus. This allowed many of the restrictions on travel and other activities to be lifted, providing some impetus to economies.

As Q3 continued, concerns about inflation, increasing energy costs and supply chain bottlenecks materialised, impacting on the performance of equities. This is highlighted in the graph below, which shows the performance of MSCI Europe, one of the region’s leading indexes for equities. 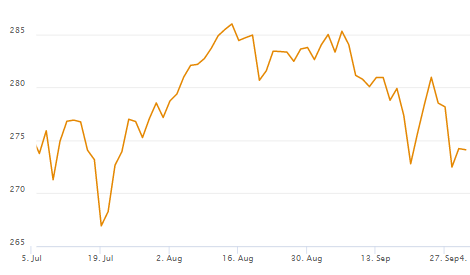 The European Central Bank said it would accept a moderate and temporary overshooting of its 2% inflation target, as figures revealed annual inflation in the Eurozone was estimated to be 3.4% in September. This was up from 3% in August.

The IHS Markit Eurozone Manufacturing (PMI) stood at 58.6 in September 2021. This was a significant drop from the 61.4 seen in August.

Equities showed a small positive return in Q3, following on from strong earnings that lifted US stocks in the run up to August. This coincided with the Federal Reserve’s “dovish” tone towards raising interest rates.

As the quarter progressed, performance slowed as growth and inflation fears set into the markets.

In September the Fed also said it would be announcing its tapering of quantitative easing, which means it will slow down the pace of purchasing assets to help the economy.

While China continues to recover from the impact of Covid-19, industrial output hasn’t lived up to expectations. In September 2021, the Purchasing Managers’ Index (PMI) in China was 49.6. An index value below 50 indicates a contraction.

During Q3, there was a sell-off in Chinese stocks due to concern over continued supply chain disruptions, and fears about the implications of higher food and energy prices for some markets.

Towards the end of the quarter fears rose over the property group Evergrande, and its ability to service its debts, sparking global investor concerns over risk.

If you would like to discuss your investments and their performance during Q3, please get in touch using our email admin@stonegatewealth.co.uk or by calling us on 01785 876222.

Please note: This blog is for general information only and does not constitute advice. The information is aimed at retail clients only.

The value of your investment can go down as well as up and you may not get back the full amount you invested. Past performance is not a reliable indicator of future performance.

You’ll benefit from news and updates focused on the financial topics of interest to you.

Take your first steps towards financial freedom today. Give us a call, send us an email or use the direct message box here to get in touch with our team.

The information contained in this website is subject to the UK regulatory regime and is therefore restricted to consumers based in the UK. The Financial Conduct Authority does not regulate trust and taxation advice as well as some forms of estate planning. You should be aware that investments carry varying degrees of risk and as their underlying value can fall as well as rise you may not get back the full amount invested.

A summary of our internal complaints handling procedures for the reasonable and prompt handling of complaints is available on request and if you cannot settle your complaint with us, you may be entitled to refer it to the Financial Ombudsman Service at www.financial-ombudsman.org.uk or by contacting them on 0800 023 4 567